In Memorium: RIP Frank Pugno, Author of these pages on Theatreorgans.com He passed away Sept 29. 2013

The Wurlitzer Company goes back to the 1600s in Germany, manufacturing lutes and violins.  They developed, over the centuries, band instruments and were famous for jukeboxes.

The Wurlitzer Organ will always be remembered as the Mighty Wurlitzer theatre organ of the 1920a and 1930s.  In 1935, the company discontinued production of these fine instruments.

Just before the involvement of the United States in World War II, the Wurlitzer Company purchased the Everett Organ Company in Grand Haven, Michigan, USA.  This latter company was famous for the Orgatron, which was a reed organ electronically amplified.  In this form, it was not practical and needed many improvements to be a fully competitive instrument.  In the mid-1960s, the Hammond Organ Company purchased Everett.

After the war, Wurlitzer came out with several models using reeds and electronic amplification, designated as various models from Model 20 to Model 50.  These instruments were excellent, I have played several of them in churches and they sounded exactly like pipe organs.  In 1953 and 1954, these models were discontinued and a new, streamlined version of the reed-electric organ was introduced.  They were the 44 (they did not call it 4400 as they did with other models), 4600, 4602 and 4800.  The 44 was a spinet with nine stops on each manual and three lever controls for pedal volume and vibrato.  The pedal had a built-in sustain.  The 4410 had percussion (Attack and Sustain), and subsequent models with additional features were called 4420, 4430, etc.  The 4600 had two 61-note manuals and 25 pedals with a standard stop system without levers.  Ken Griffin used this model for many recordings and his television program 67 Melody Lane, although most of his work was on Hammond and a sparse amount on Conn.  The 4602 was the same as the 4600 but had a 32-note pedalboard and modification of some of the stops.  It was a church model.  Examples of the changes are:  4600 Strings 8’, 4602 Salicional 8’; 4600 Tone Coloring 2-2/3’, 4602 Nazard 2-2/3’, etc.  Also, on the 4600, the pedal stops were Double Bass 16’, Octave Bass 8’, Pedal Soft, Pedal Medium, Pedal Full, but the 4602 had five traditional organ voices and volume was controlled through the combination of those stops.  The 4800 was a large two-manual, 32 pedal organ with more stops, preset stops and a crescendo pedal.  One clarification should be made at this point.  These organs are not actually reed organs in the sense of Grandma’s old pump organ.  The reeds are only used to produce the vibration necessary to generate a note, which is then subject to electronics.  You do not actually hear the sound of the reeds.

In 1959, Wurlitzer introduced their first electronic organs using master oscillators.  The 4100 was the first model of this type.  It was a standard spinet and included the Slide for Hawaiian guitar and other effects.  The 4460 was the console version.  I made two personal observations of these instruments:  their stop lists were very close to Lowrey organs at that time, but the Wurlitzer tone was a little less distinct than Lowrey.  Also, the Slide was a copy of Lowrey’s Glide, which dated back to 1956.  Wurlitzer still continued to manufacture the reed-electric organs until 1964.

Two Wurlitzer inventions also came on the scene.  The Side Man, an automatic rhythm unit was introduced in 1959.  This was a separate unit with its own controls and amplification, and was smaller than a tone cabinet.  Gulbransen, actually Seeburg, later developed the first rhythm unit built directly into the organ.  Wurlitzer’ other invention was the Ssh-Boom, which provided bass drum and cymbals sounds when activated by the keys.

In 1964, Wurlitzer gave up vacuum tubes and went all-transistor.  The Model 4300 was a big spinet with many features and an abundance of good organ tone.  The 4500 was the console version, and uniquely, had the identical stoplist of the 4300.  Both of these organs included, for the first time, Spectra-Tone, which was a rotating speaker system actually built into the console.  It was similar, but not identical sounding to a Leslie speaker.  These models also included the Ssh-Boom.  Other models of various sizes were also manufactured.  In 1967, the Model 4700 appeared featuring, for the first time since the reed-electric days, a full-size church organ with 32 pedals.

The next significant development was the introduction of the Orbit synthesizer, a sub-standard keyboard above the two manuals of the organ.  The first model to include this was the 370 spinet.  It made its way to all models.  Eventually, a genuine Leslie replaced the Spectra-Tone.

In the mid to late 1970s, Wurlitzer developed models that can be considered the greatest age of the Wurlitzer electronic organ.  The Models 630 and 950 were superlative instruments.  They had theatre voicing, electronic organ sounds, special effects, automatic left hand and pedal, the Orbit, the Slide and much more.  Other smaller versions were also available.

In 1980, Wurlitzer introduced their so-called “analog-digital” organs.  To a computer person, this is a laughable term.  Although Wurlitzer did not invent the computer organ, they jumped into it headfirst.  These organs used the microprocessor for the wrong reason, that is, to generate the automatic left hand and pedal; it should have been used for the tone generator.  These organs did not have distinct differences in stop voicing, and many people did not like the “earth tone” colors of the stop tablets.

In the 1980s, Wurlitzer started working with Hohner in Germany, and manufactured the Omni series of organs in competition to the new portable keyboards that were crashing into the organ market.  Also, in the 1980s, the Baldwin Piano and Organ Company merged with the Wurlitzer Company, and produced organs under the name Classic Church Organs.  The combined Baldwin-Wurlitzer operation collapsed in 1993. 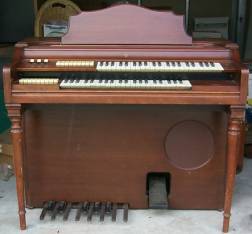 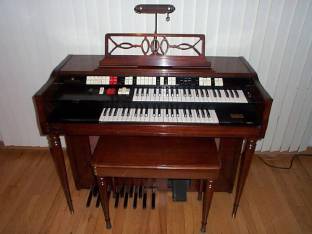 This page brought to you by:
VintageHammond.Com - We Buy-Sell-Trade Vintage Hammond Organs